Trapped wind or contractions? How to know when you're in labour Trapped wind and contractions are often confused with one another and can feel very similar in intensity. The main difference being that trapped wind will end in ‘free’ wind. Labour pains will end in a baby! If your tummy hardens every time you get a pain or they become regular (every 2-3 minutes) then it's likely to be contractions, or Braxton Hicks, rather than gas.

Both of these types of pain can feel really intense and unless you have suffered from a serious bout of both trapped wind and labour, you cannot even begin to compare or contrast the two sensations.

It is true that they can both feel the same in intensity as both are stomach cramps. One is the uterus cramping around the baby, the other is pressure on the stomach by the build up of gases released by food products during digestion.

It is not uncommon to see women on a labour ward feeling like they are in labour, when in fact it is a build up of these noxious gases in their intestines.

Read on to discover the main differences between trapped wind and labour pains - and how to tell which you're experiencing. 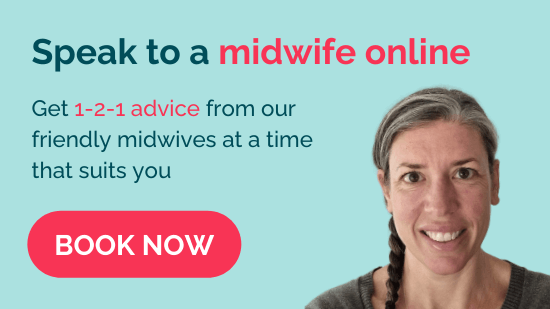 What's the difference between trapped wind and contractions?

The main difference between excess gas and contractions is the type of stomach cramp. When you are having labour pains, your whole uterus contracts and becomes quite hard. When you are suffering from trapped wind, your stomach may feel distended but the top of the uterus won’t be going hard at the same time.

Trapped wind can be very uncomfortable - you may feel bloated and your stomach may make rumbling or gurgling noises, resulting in excessive ‘free wind’ (also known as burping or farting). Excess gas usually occurs after having eaten.

Labour pains may feel like period pains initially and will increase in intensity and frequency. There may also be some other key signs that it is labour rather than wind. Things like a show, which is when the cervix releases a lot of mucus that can sometimes look quite bloody or similar to snot! If this occurs, then the chances are you are going into labour.

Read our midwife's guide to coping with labour pain.

How can I relieve trapped wind in pregnancy?

There are many ways in which you can try to relieve trapped wind whilst pregnant:

If you are feeling very unwell, lying on your left hand side is the best position. It has been said that turning yourself upside down can also help to relieve gas, but unless you are an olympic gymnast, this is probably best avoided in pregnancy!

If you are prone to developing trapped wind and have suffered from it regularly in the past, it might be time to take a look at your diet and start to eliminate any foods that cause you to feel bloated, gassy or constipated.

Certain veggies like cabbage, cauliflower and broccoli and pulses (such as lentils and beans) are known to cause a significant amount of gas. Whilst they are abundant in their nutritional benefits, it might be better to give them a wide berth for the remainder of your pregnancy. The key is to find your personal triggers and try to avoid them for now.

If trapped wind pain becomes regular, comes closer together over time and the top of your uterus (your fundus) is becoming hard during each pain, then it is possible that you are in fact going into labour.

If you are over 37 weeks pregnant then you should have all the contact numbers at your disposal to speak to a midwife and get the best advice. If you are less than 37 weeks pregnant you will need to be seen straight away by the midwives/obstetric team at your nearest hospital. Could it be Braxton Hicks?

Braxton Hicks are what’s known as ‘practice contractions’ where the womb contracts and releases. They can sometimes become intense and feel like labour pains. But like trapped wind, they will end.

If you ever have any concerns or are worried by any abdominal pain during your pregnancy, it is always advisable to give your midwife or hospital a call.

Trapped wind after a c-section

Some women develop trapped wind following a caesarean section. As the internal organs have been disrupted during the operation, it is possible that little pockets of gas may be trapped, or you may become a little constipated.

The best advice in these circumstances is to get up and moving as soon as possible. A stroll to the end of the ward can be all it takes to relieve this wind. Plenty of peppermint water/tea always helps.

Sometimes when lying still in bed, the wind can creep up and cause pain in the chest or in the back/shoulder area. This can feel quite alarming at the time, but again, don’t panic and try to walk around. Peppermint products and antacids can all help here.

Want to speak to someone about your pregnancy? Book an appointment with one of our private midwives at a time that suits you to get specialist advice with any concerns. Kate has been a Midwife within the NHS for more than 15 years and supports women to work harmoniously with their bodies and tune into their intuitions.